(PHILADELPHIA, PA, 8/30/19) -– On a late summer evening on his way home from work, Philadelphia native and resident Abdul Aziz Johnson and his two friends decided to stop at Starbucks on Germantown Avenue in the Chestnut Hill neighborhood of Northwest Philadelphia. Little did Mr. Aziz realize he was about to become a victim of hate speech in the most unlikely of venues.

Approaching the ordering counter, Mr. Aziz ordered and paid for three iced-drinks and when asked, gave his name as “Aziz.” When the drinks were ready, a barista at the pick-up counter called out the kind of drinks, rather than the name of the customer, which is the customary procedure, as any regular Starbucks customer can attest to.

With drinks in hand, Mr. Johnson and his friends proceeded to a book store a short distance away. It was only later that Mr. Johnson made a disturbing discovery: in the space on the receipt attached to the plastic cup where the customer’s name is printed was the word “ISIS”. [photo below]

Was this an innocent mistake, or a sick joke associating Mr. Johnson and his friends, who were wearing traditional Muslim clothing, with the extremist group responsible for tens of thousands of deaths in Iraq and Syria, thus perpetuating the lie that Muslims are uniquely prone to violent behavior and terrorism?

Mr. Johnson’s wife posted the photo of the offending label on Facebook and Mr. Johnson himself wrote to Starbuck Customer Relations about the bigoted incident, but never received a reply. While Starbucks engaged with Mr. Johnson’s wife on her Facebook thread, the couple received no further follow-up from the corporate headquarters or the branch in Chestnut Hill.

CAIR-Philadelphia, the local chapter of the country’s preeminent Muslim civil rights and advocacy organization, with 35 affiliates nationwide, finds Starbucks’ behavior in this incident exceedingly deficient. After the incident in 2018 when two African American men were arrested in another Philadelphia Starbucks, one would have expected a greater commitment to religious and racial diversity from Starbucks staff. Instead, we get bigoted slurs against the religion of 1.62 billion people, and the fastest growing religion in the United States.

“Mr. Aziz has the constitutional right and privilege to wear traditional Muslim garb in compliance with the dictates of his Islamic faith without harassment or fear of retribution, or further bigoted behavior. Mr. Aziz’s mode of dress is a sacred spiritual activity for those who practice Islam and is clearly established in the Qur’an as an act of worship (See Qur’an 7:26; Qur’an 33:59; Qur’an 24:31). As such, it is a constitutionally protected right for Mr. Aziz, one for which your company should openly respect.”

CAIR-Philadelphia is also demanding that Starbucks send a letter of apology to Mr. Johnson and that Starbucks executives meet with CAIR officials to discuss integrating anti-Muslim racism training for the corporate giant’s Philadelphia employees.

Jacob Bender, CAIR-Philadelphia Executive Director, said: “This incident takes place in a culture of hatred pushed by the highest offices of the nation. Muslim children are called names every day in schools around the country. The incident in Chestnut Hill is a symptom of a deep running problem that needs to be rectified by educational programs and a zero-tolerance policy.”

Photo of Starbucks Receipt Below: 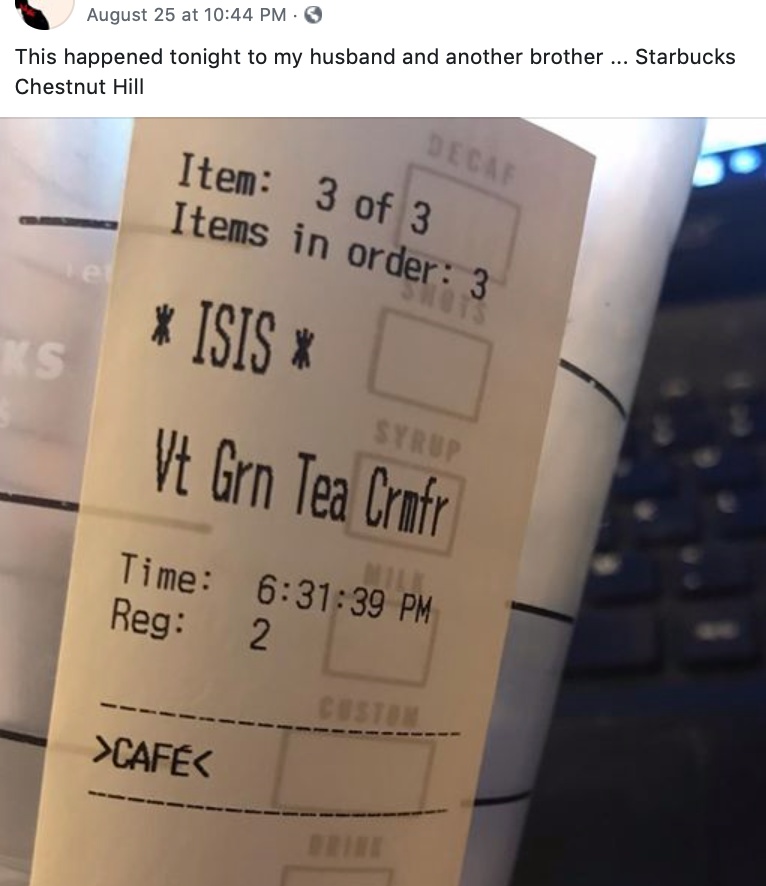