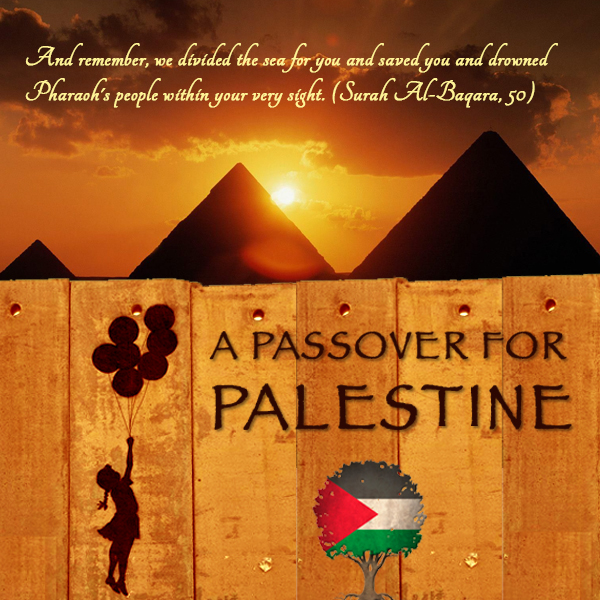 and the Tikkun Olam Chavurah invite you to:

A PASSOVER FOR PALESTINE

The Jewish holiday of Passover, sometimes referred to as the “Festival of Freedom,” commemorates the liberation of the Hebrew slaves from their bondage in ancient Egypt of the Pharaohs. The Exodus narrative is familiar to many Muslims, as a version of the story is found in the Quran.

According to Jewish tradition, Passover lasts for one week, with the central event of the holiday being a celebratory meal called a seder where symbolic foods are eaten. During the seder, participants take turns reading aloud from a text called the haggadah that narrates the story of how Prophet Moses (Musa), with God’s help, led the Hebrew slaves to freedom.

Since there is not a universally accepted text for the haggadah, it has become a tradition for liberal/progressive Jews to reinterpret the haggadah text in light of contemporary events, emphasizing the struggle for social justice. Thus, there have been many haggadahs on different themes, for example: protecting the environment and warning of the danger of climate change; advancing women’s rights; supporting the civil rights struggle of African Americans; and defending the rights of immigrants and migrants in this country.

This Passover, which falls between April 19 – 27, CAIR-Philadelphia, Jewish Voice for Peace, and the Tikkun Olam Chavurah (a Reconstructionist Synagogue) are hosting a Passover seder dedicated to the Palestinian struggle for national independence and self-determination. This unique and historical collaboration between social justice activists in both communities is proof that Jews and Muslims are not the eternal enemies some would see us as. Rather, this Passover, we will voice our opposition to the xenophobia and racism that is daily being promulgated and broadcast across our nation by the irresponsible voices of the right-wing media and the highest-level government officials in the land.

The struggle for justice in Israel/Palestine continues to be of immense importance to people within both the Jewish and Muslim communities. This is why we will come together this Passover to share stories and songs of freedom that resonate across the centuries and have relevance to the Palestinian struggle for justice. CAIR urges you to support and attend this historical event.

This event is free, but you must register at:
pa.cair.com/passover-for-palestine