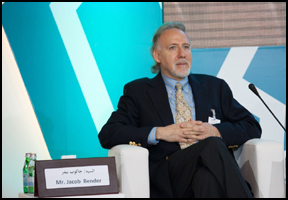 I am very pleased to introduce myself to all of you today as the new Executive Director of the Philadelphia Chapter of CAIR, the nation’s preeminent Muslim civil rights and advocacy organization.

I bring to CAIR a decades-long commitment to promoting peace and justice between Abraham’s Children (Abna’ Ibrahim) and a long resume of professional accomplishments in communications for nonprofit and corporate clients. I have published dozens of op-eds and letters-to-the-editor in newspapers and magazines around the world, many dealing with Muslim-West relations. (You can read a selection of these writings at http://outofcordoba.com/directors-publications/.)

Since 9/11, I have been intensely involved in outreach to the Muslim community, both in the U.S. and abroad. I have made over fifty speeches at mosques and Muslim centers and conferences around the world, including numerous times in Qatar, and had the honor of addressing an international conference of Muslim scholars at Al-Azhar University in 2009. My life has been immeasurably enriched by my association with the Muslim scholars and community leaders who have befriended me, most notably Dr. Sayyid M. Syeed of ISNA, the recipient of CAIR’s 2013 Lifetime Achievement Award at the recent CAIR Annual Banquet.

My background also includes work as a documentary filmmaker, and much of my interaction with the Muslim community has centered upon the production of “Out of Cordoba,” the award-winning film I began to work on in the months following the attacks of Sept. 11, 2001. The film explores the multifaith culture and immense influence of Al-Andalus, and Muslim and Arab thinkers in general, upon Western civilization.

“Out of Cordoba” has screened over 120 times at mosques, churches, synagogues, at universities and MSA chapters, and at conferences and film festivals around the world, including at United Headquarters in New York. You can read more about the film at www.outofcordoba.com. Please contact me if you are interested in arranging a screening at your local mosque or interfaith organization.

In the weeks and months ahead, and working with my new colleagues Amara Chaudhry-Kravitz, Esq. (Legal Director) and Leena Jafar (Operations Coordinator), I look forward to becoming acquainted with all of you as we confront the great challenges before us: helping and representing those confronting public discrimination; promoting respect and appreciation of Muslims and Islam in the American public; furthering greater understanding among America’s different communities of faith; advancing the cause of peace and justice for all the people of our country, in addition to defending CAIR against the unfounded and hate mongering attacks of the Islamophobic network.

I am both humbled and honored by the trust that CAIR has placed in me. My selection is perfectly in keeping with CAIR’s long-standing commitment to pluralism and promoting greater interfaith understanding, and is, I believe, a symbol of Islam’s intrinsic tradition of mutual respect. As I have learned:

O people! We created you from a single (pair) of a male and a female, and made you into nations and tribes, that you may come to know each other (not that ye may despise each other. (Holy Qur’an, 49:13)

To each among you, We have prescribed a law and a clear way. If Allah had willed, He would have made you one nation, but that (He) may test you in what He has given you; so strive as in a race in good deeds. (Holy Qur’an, 5:48)