Home » Civil Rights » Another Hashtag But Still No Justice 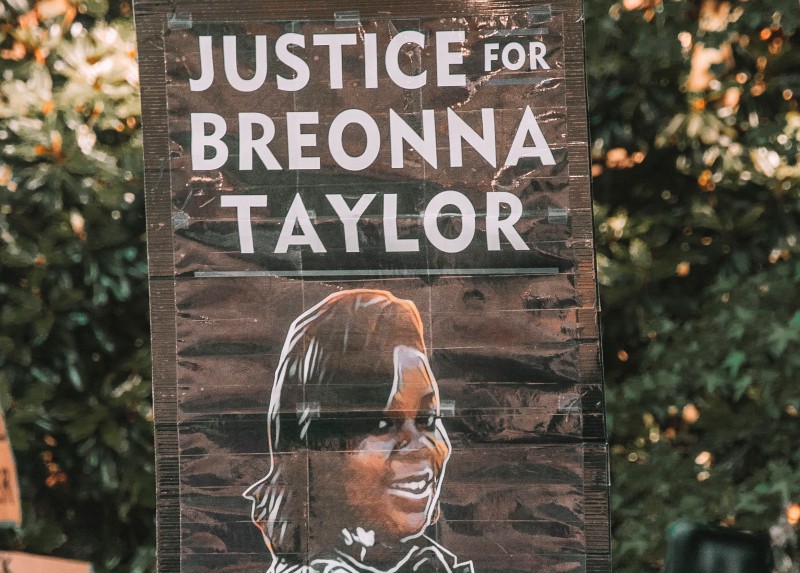 “The most disrespected person in America is the black woman.”
– Malcolm X

In one of his most famous speeches, aptly entitled Who Taught You to Hate Yourself, Malcolm X spoke to an unfortunate truth, “The most disrespected person in America is the Black woman… the most unprotected person in America is the black woman.” Malcolm’s comments keenly observed that the nation’s avowed principles like “life, liberty, and the pursuit of happiness” and/or “equal protection” did not apply equally in a nation with a deeply entrenched social caste system centered on race and gender. The founding ideals of our democratic republic “were false when they were written,” Malcolm knew this, and those in attendance did as well. We know it too. Few recent incidents illustrate this tragic reality like the Jefferson County grand jury’s announcement of the indictment against Brett Hankison.

Unfortunately, in a year full of unrelenting grief, the Black community is left to mourn another person turned into a hashtag. We are left to mourn with no justice, minimal answers; it’s the same the same story by another name. This story, this hashtag, had a loving family, a promising career, and a bright future; her name was Breonna Taylor. Breonna made her living keeping people alive, working two jobs as an essential worker during the COVID-19 pandemic, one of which was at University of Louisville Health. Nevertheless, most Americans never learned her name until her brutal murder made national headlines. She only made headlines because her family, her friends, her soon-to-be fiancé would not let us forget her name. An emergency medical technician who aspired to become a nurse, she performed the type of work Americans have come to “applaud and serenade in appreciation as they return home at night, recognizable both by their uniform and exhaustion.” But, Breonna is no more, she was shot dead in her apartment after a botched raid led by Louisville Police Officers Jonathan Mattingly, Brett Hankison, and Myles Cosgrove.

Breonna Taylor was shot to death by these three negligent officers shortly after midnight on March 13, 2020 while the officers sought to execute a warrant in pursuit of a suspect already in police custody. Six months later, on September 23, 2020, Kentucky Attorney General Daniel Cameron announced the grand jury returned an indictment for only one officer — Brett Hankison. His charges? Wanton endangerment for the bullets Hankison indiscriminately fired that went into the walls of Taylor’s neighbors’ apartments not the bullets that went into her. The charge of wanton endangerment is the lowest of the lowest felonies that could have been handed down.

When Taylor was shot on the night of March 13, 2020, minutes after midnight, she and her boyfriend Kenneth Walker were asleep when they heard faint knocks at their front door. Plainclothes Louisville Metro Police Department Officers Myles Cosgrove and Brett Hankison, and Sgt. Jonathan Mattingly. The officers were executing a “no-knock warrant” in search for narcotics. Louisville police had investigated two men believed to be selling drugs at a location far from Ms. Taylor’s home; however, a judge signed a warrant allowing the no-knock raid because the officers alleged the two men under investigation used that address. The officers found no drugs in Breonna Taylor’s apartment on the morning of March 13th, but the aftermath of their sloppy work left her laying in a pool of blood on her floor while Walker tried to understand what had occurred.

Walker has reported hearing loud banging on the front door shortly after midnight, demanded those on the other side of the door identify themselves, and they refused. They ultimately barreled through the door with a battering ram, and Walker, believing burglars tried to enter the apartment, fired a “warning shot” to ward off potential intruders. The officers responded with at least twenty shots, eight of which struck Taylor, with several others hurling through the walls of the neighbors’ apartments. The officers left Taylor on the ground for more than twenty minutes before attempting first aid, while Walker tried to ascertain what happened. He made frantic calls to 911 saying he believed burglars just shot his girlfriend, and later called Tamika Palmer, Breonna Taylor’s mother. The officers eventually arrested Walker for attempted murder, though Walker managed to have those charges dropped after seeking legal counsel. Their initial police report indicated no injuries on the scene, though Breonna Taylor clearly died as a result of their actions.

The entire episode is a tragic display: the faulty warrant, the dangerous method of its execution, the officers firing indiscriminately into Breonna Taylor’s apartment and that of her neighbors, arresting Kenneth Walker for a legitimate attempt at self-defense, falsely claiming Walker shot one of the officers, alleging no one was injured on the scene. Many have left with obvious questions, like: How do you execute a sham warrant, blindly fire shots into the apartment, try to cover it up, and not face consequences for it? According to Kentucky Attorney General Cameron, “the fatal bullet was fired by Cosgrove, but added that Cosgrove and Mattingly were justified in the use of force because they were shot at first. Cameron said state law “bars us from seeking charges in Breonna Taylor’s death.” Cameron also said, “there was no conclusive evidence that any of Hankinson’s 10 gunshots hit Taylor inside her home.”

The callous treatment of Breonna Taylor also reveals the danger of the police work that brought about her demise. No-knock warrants are a risk to all citizens. These warrants, a construction of the Nixon Administration, allow officers to enter into homes without knocking or even introducing themselves as a means to allow them to benefit from the element of surprise. These militarized raids “demonstrate the ubiquity of bad policing practices—and we now know the public agrees they do not make communities safer, but put everyone, including the officer, in danger.” They also are arguably pure violations of Fourth Amendment protections against unreasonable search and seizure. The benefit of being able to arrest some criminals in the necessary type of situation is outweighed by the dangers. Especially in a situation where the person who is the subject of the investigation is not present. Officers claimed they believed Taylor would be home alone that night but, how can you assume that she would not have anyone in the home after midnight. These officers willingly and knowingly put lives in danger and in the end took a life. These warrants are not protecting our communities they are tearing them a part and they are far too dangerous to still be a tactic used by police. They expose the continued problems of bad policing and the continued carelessness of those hired to protect and serve. These warrants are one of the things that would need extensive training to make sure they are being used in the correct situation and making sure they are applied correctly to keep everyone involved as safe as possible. The problem with that is how it reveals numerous police departments are exposed for bias and bad training. Unfortunately, Taylor was not the first and she will not be the last. Breonna Taylor is one of more than 100 individuals including both civilians and law enforcement officers killed in no-knock raids since 2010 and one of more than 500 unarmed Blacks killed by police since 2013.

Black people lined the streets and made calls of justice for over six months demanding justice for Breonna Taylor. Prominent figures like Rihanna and LeBron James even joined the calls for justice. James posted on his social media, “The most DISRESPECTED person on earth is THE BLACK WOMAN! I promise you I’ll do my best to change this as much as I can and even more!! LOVE to you QUEENS all over this country and beyond!” This seemed to echo the sentiments of millions who decried failure to Breonna Taylor to receive equal protection under the law. So many had questions like, “how can the law bar the officers from being charged? Why don’t Blacks have the same stand your ground laws in their own homes? Why are officers not responsible when the warrant executed was improper? Where is the justice where is the accountability.”

The City of Louisville settled a wrongful death suit filed for the family, but the family and protesters alike agree it falls short of the true demand. No charge or monetary award had the power to bring Breonna Taylor back, yet the collective demand of the public was always to hold officers Jonathan Mattingly, Brett Hankison, and Myles Cosgrove accountable for their role in her heinous murder. It was a simple demand to acknowledge the worth of Breonna’s life, which they stole from her while she rested in her own. Instead, the grand jury only saw fit to hold Officer Hankison accountable for bullets rifling through the walls of neighboring apartments. The potential harm subjected to others appears to be greater than the actual harm of killing Breonna Taylor in her home. This should not be. It is a grave miscarriage of justice. Our fight continues.

As many have come to grips with the fact that these harsh realities have left them with no more tears to cry.

People want to see an end to hashtags. We must demand change, we must continue to fight, and in so doing defend against inhumane treatment from police departments.