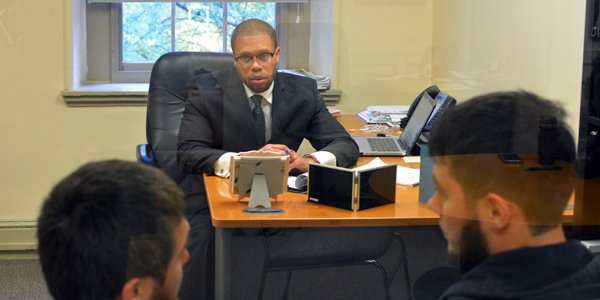 [A Note from Jacob Bender, CAIR-Philadelphia Executive Director: It has been over a year since Timothy Welbeck assumed his position as CAIR-Philadelphia’s Staff Attorney. In that time, I have witnessed his phenomenal dedication to his clients, the Muslim community, and the cause of civil rights on both a local and national level. (This at a time when calls to our office reporting workplace discrimination, government harassment, and schoolyard bullying have more than doubled; a result, I believe, of the climate of hate and extremism foisted upon the nation by the present administration and its media defenders). Not content to advance social justice through his work with CAIR, Timothy is also a professor at Temple University and Thomas Jefferson, where he teaches classes on Constitutional Law, Urban Affairs, and Hip-Hop Culture. Timothy furthermore brings to CAIR his deep knowledge of the African American freedom struggle and its 400-year battle against white supremacy, an awareness that has benefited our organization in numerous ways as we go about serving the needs of the American Muslim community. CAIR and the Philadelphia Muslim community are indeed fortunate that, at this crucial moment in our nation’s history, Timothy is serving as our Staff Attorney.]

CIVIL RIGHTS YEAR IN REVIEW
From Civil Conflict to Civil Rights: My Year on the Legal Battlefront

As we have remarked before, the United States continues to witness a spike in Islamophobia, which has become exacerbated by the brazen bigotry and xenophobia of the present presidential administration. While various outlets like Newsweek and The Washington Post each have reported on this heinous rise in hate targeting Muslims, I can personally attest to this increase firsthand based on the numerous complaints I routinely field as the Muslim community suffers from the anguish and anxiety caused by the implications of increased harassment and discrimination.

Consequently, this year, as we do each year, we have vigorously engaged in the fight against Islamophobia and utilized the weapon of the law to secure the rights and liberties promised by the Constitution.

By way of example, nearly 40% of the prospective clients I encountered this year have raised complaints of harassment and discrimination in the workplace. I have routinely advocated and represented Muslims whose employers denied them reasonable religious accommodations to perform basic practices of their faith (attending Jumu’ah, making hajj, wearing the hijab). I have levied complaints against dozens of infringing employers, compelling many of them to make reasonable religious accommodations for their Muslim employees who had previously been denied. Moreover, I am currently in the process of negotiating a settlement between a woman wrongfully terminated for religious discrimination and her former employer. This settlement would amount to at least a year-and-a-half of lost wages for the client. Additionally, I successfully represented a woman wrongfully terminated for religious discrimination who was subsequently denied unemployment compensation. She received her award for unemployment compensation and has since begun a new position at a new employer.

A significant number of prospective clients have complained of persistent harassment and bullying of school age children in primary school and secondary school, and an increasing number of raised complaints of colleges and universities failing to offer reasonable accommodations for Muslim students. I have represented a number of children in these circumstances and compelled the schools to adequately address the harassment and bullying in addition to remedying the culture that fosters that behavior. On two other occasions, I compelled universities to offer religious accommodations to Muslim students. The hallmark of this sort of advocacy came when CAIR’s work with various community leaders and elected officials compelled a state agency to amend its policy that required an exception for students to wear head coverings during interscholastic athletic competition.

Another area of growing concern for our office is government overreach and police brutality. We are currently preparing to file suit against a local police department who falsely imprisoned a Muslim man shortly after he shared his faith with his colleagues at work and have successfully represented him in ongoing criminal proceedings related to this false imprisonment. Moreover, I have represented multiple individuals whom the FBI sought to question regarding their purported connections to what the government described as “radical Islamic terrorist cells.” In both instances, these charges were proven false and the FBI discontinued its attempt to question these individuals after CAIR represented them in interviews. On two other occasions, I have contacted the FBI on behalf of individuals contacted for questioning and declined an interview. In both instances, the FBI no longer contacted these individuals. The aforementioned cases are a mere summary of the ways CAIR continues to fight against the rising tide of Islamophobia, while continuing to protect your constitutional rights and privileges.

Much has been written about the deepening polarization of American politics following the political ascension of President Trump, particularly concerning how his rhetoric and his administration’s policies perpetuates white supremacy “in all its truculent and sanctimonious power,” including how white nationalists and neo-Nazis openly laud the president as a champion of their cause. Many have observed how this rhetoric and its corresponding policies have had devastating impact for vulnerable communities across the nation.

We have reported, both anecdotally and empirically, that the United States has witnessed a spike in Islamophobia within the past few years. Others have joined this chorus. The FBI has reported an increase in documented hate crimes in the US for the third year in a row. According to the Southern Poverty Law Center, the number of anti-Muslim hate groups in the U.S. has nearly tripled, and the number of hate crimes targeting Muslims has nearly doubled within the two years coinciding with President Trump’s presidential campaign and subsequent presidential administration. This comports with records compiled by CAIR National and our own internal records, both of which were reported on by The Philadelphia Inquirer earlier this fall. Pew Research Center has also reported the number of assaults against Muslims in the United States increased sharply between 2015 and 2016, to the point it easily surpassed the modern peak reached in 2001, the year of the September 11 terrorist attacks.

The law is one of our most powerful tools to protect our society’s most vulnerable citizens. Advocacy in and through the established law of the United States, while further lobbying for more effective laws, is a primary means in which we can hold America accountable. As I have written previously, I became an attorney in large part for this very reason, and continue to use my legal training to daily facilitate the cause of justice for those impacted by hate, bigotry, and xenophobia. At CAIR, we will continue our work to resist the hate and intolerance of this current administration and remain steadfast in fighting for the civil rights and liberties of American Muslims and for an America living up to its self-proclaimed ideals of liberty for all.

To support the invaluable work of CAIR-Philadelphia Staff Attorney Timothy Welbeck, please give generously in the remaining days of 2018.