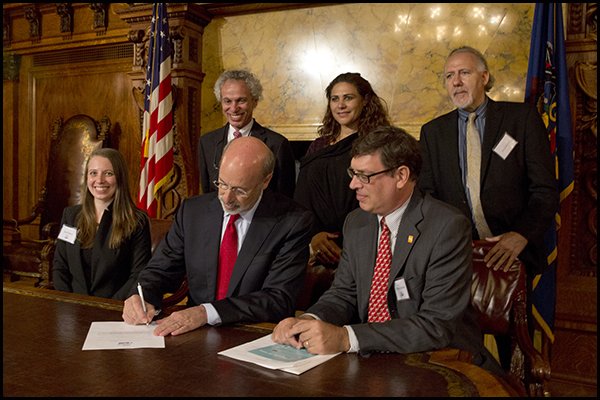 Governor Tom Wolf signs “The Pledge to Combat Bigotry.”
Marwan Kreidie (seated at right) and Jacob Bender (standing at right) were in attendance.

Last Wednesday, September 30, I travelled to Harrisburg with a group organized by the Arab American Institute (AAI) in Washington, DC and Marwan Kreidie, an AAI activist from Philadelphia. During the day, we met with Governor Tom Wolf, who signed “The Pledge to Combat Bigotry,” a public statement against anti-Arab and anti-Muslim hatred in politics.

It is a sad commentary on our nation’s history that two-and-a-quarter centuries after the Bill of Rights was signed, a century-and-a-half after the end of American slavery, and 50 years since the passing of the great civil rights acts of the 1960s, we find it necessary to ask our elected officials to sign a pledge against anti-Muslim bigotry in contemporary political discourse. But for American Muslims, this is no ordinary time.

Consider the following: Presidential candidate Donald Trump is silent when one of his supporters, referring to Muslims, says “we have to find a way to get rid of them,” Ben Carson, another candidate for president, says a Muslim should not be allowed to run for president, and armed anti-Muslim hate groups are planning protests this weekend at mosques around the country. 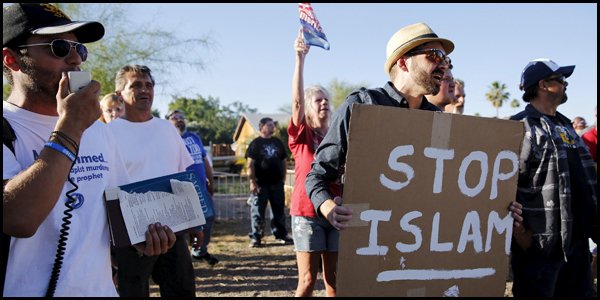 Photo of anti-Muslim demonstrators in a recent protest outside an Arizona mosque.

History has shown that neither silence in the face of bigotry nor retreat into the cocoons of our own communities will make the Islamophobic menace disappear. Permit me to say that for immigrant Muslims in these often perilous times, it is no longer a possibility to fly below the radar and simply hope for the best. The only credible response is a sustained effort at protecting the civil rights of American Muslims and making a visible presence in the democratic political process.

This is, in fact, why CAIR exists, and why we are organizing our own trip to Harrisburg: our first annual “Muslim Capitol Day” on October 20. On that day, dozens of Muslims from around Pennsylvania, as well as our Christian and Jewish allies, will converge on the Capitol Building for a rally and press conference in the Great Rotunda at 1:00 pm. Throughout the morning, participants in Muslim Capitol Day will be meeting with their elected representatives to share with them other concerns of the Muslim community.

Muslim Capitol Day will be a historic opportunity for American Muslims to make their voices heard in the halls of power. It will also be an occasion to put into practice the social justice values of Islam, as we read in The Qur’an: “We sent Our Messengers with clear signs and sent down with them the Book and the Measure in order to establish justice among the people.” (Quran 57:25).