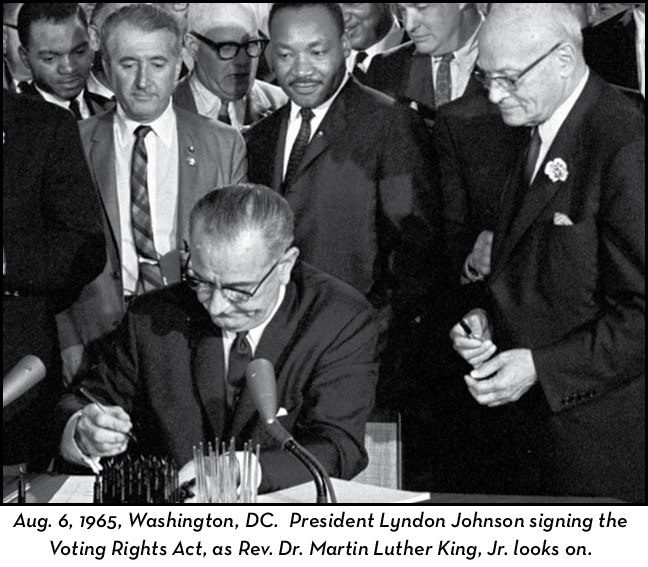 As we mark the 50th Anniversary of the signing into law the historic Voting Rights Act of 1965, it is important to keep in mind that the struggle of African American to exercise their constitutional right to vote was, and is, not just an African American issue, but an American issue, and one that CAIR believes should be of great importance to the American Muslim community. As President John F. Kennedy said, “The rights of every man are diminished when the rights of one man are threatened.”

Often regarded as the most successful civil rights law in the nation’s history, the Voting Rights Act was enacted to combat the systemic discrimination that prevented African Americans from voting in the former states of the Confederacy. Despite the fact that the 15th Amendment, signed by President Lincoln in 1865, explicitly guaranteed the right to vote regardless of race, southern states historically used subversive techniques, in addition to intimidation and violence, to deny African Americans the vote. These techniques kept African American voter eligibility close to 0% between 1892 until the passage of the Voting Rights Act.

Unfortunately, the current Supreme Court of the Unites States, led by its right-wing members, removed the teeth from Section 5 of the Voting Rights Act in 2013. As a result, individuals now have to rely on Section 2 in combating discriminatory voting laws, which is more limiting than Section 5, and places the onerous on plaintiffs to challenge voting laws after such laws have been passed. Just weeks after the Supreme Court’s decision, counties in North Carolina and Texas passed new voting requirements that, while on their face appear neutral, have a disproportionately adverse effect on African Americans. Lawsuits are currently pending to strike down these discriminatory laws.

For almost half a century, the Voting Rights Act protected the right to vote for all minorities, including Muslims. As Muslims face increasing attack and scrutiny from mainstream America, it is crucial to work together with other groups in an effort to ensure equal access to the benefits of American citizenship.