As Ta-Nehisi Coates observed in his article entitled The First White President, Donald Trump has made his worldview clear for quite some time. Coates argues that Trump’s worldview hinges on white supremacy “in all its truculent and sanctimonious power.” Numerous examples from President Trump’s behavior, both as an elected official and as a private citizen, support this notion.

President Trump began his foray into politics by perpetuating the birther conspiracy. He launched his presidential campaign by stereotyping Mexican immigrants as drug dealers, criminals, and rapists. As a presidential candidate, and then as the sitting President of the United States, he repeatedly sought to ban immigrants from seven Muslim-majority countries. Early in his career as a real estate mogul he fought to keep African Americans out of his buildings. In the wake of September 11th, he falsely claimed he observed Muslims cheering the deadly terrorist attacks. In the late 1980s, he demanded the death penalty for the Central Park Five and defended his remarks upon their eventual exoneration. He has routinely mischaracterized Muslims as a group of people who hate the United States and its way of life. Throughout the years, he has gone on record making disparaging remarks about African Americans, Jews, Muslims, women, members of the LGBT community, et al.

White supremacists and neo-Nazis have lauded President Trump as a champion of their causes, and have regularly celebrated his vile stances. Indeed, President Trump has made his worldview clear both as a private citizen, and as the occupant of the nation’s highest office. He did so again earlier this week with a series of inflammatory tweets meant to disparage Islam.

On Tuesday, President Trump retweeted three tweets from the Twitter account of Jayda Fransen, Deputy Leader of Britain First, a racist, neo-fascist organization whose leaders have been prosecuted for hate crimes and incitement to violence. In short, the President of the United States, the man who holds the most powerful individual position in the world’s most powerful nation, has unapologetically endorsed the bigoted, Islamophobic views of a fringe, extremist organization by sharing these inflammatory videos. 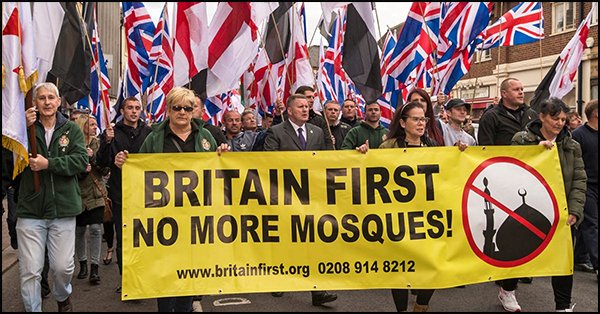 Moreover, the videos President Trump shared were widely discredited as deliberately misleading and/or patently false. Notwithstanding, President Trump and his spokespersons have defended his tweets and made no effort to correct their devastating impact. Rather, President Trump and his spokespersons have chided those who seek to reprimand him for spreading these despicable falsehoods, including British Prime Minister Theresa May. This is part of a larger pattern of behavior that ultimately increases the instances of anti-Muslim discrimination and harassment.

According to the Southern Poverty Law Center, the number of anti-Muslim hate groups in the U.S. has nearly tripled, and the number of hate crimes targeting Muslims has nearly doubled within the two years coinciding with President Trump’s presidential campaign and subsequent presidential administration.

As an African American attorney and the son of an African immigrant, I fully understand the deleterious impact racism, bigotry, and xenophobia has had on both the individual and on a larger systemic level. One of the chief crimes of the Trans-Atlantic Slave Trade and its pernicious progeny (Jim Crow, lynching, racialized housing segregation, police brutality, racial profiling, et al.) is how it stripped people of their humanity, divorced them from their cultural heritage, and perpetuated that reality for centuries. The disastrous legacy of these crimes has transcended its initial design of enslavement and has morphed into a broader series of systematic injustice, structural imbalances, and government-sanctioned violence that now negatively impacts people of color generally, the poor, immigrants from non-European countries, and Muslims.

Since I started working for CAIR on August 1st, I have seen and spoken with over 75 potential clients, with stories ranging from false imprisonment to workplace harassment and discrimination, from FBI entrapment to schoolyard bullying, travel restrictions, unduly delayed visa applications, etc. Our intake phone calls have increased substantially since the inauguration of President Trump, and we firmly believe there is a definitive link between the two. It is your support of CAIR that makes it possible for our office to serve the Muslim community, both legally, as well as the educational efforts of my colleagues. (See CAIR-Philadelphia’s free course offerings here.)

The law is one of our most powerful tools to protect our society’s most vulnerable citizens. Advocacy through the established law of the United States (or lobbying for more effective laws) is a primary means in which we can hold America accountable to its original promises of liberty and justice for all. I became an attorney in large part for this very reason.

At this juncture, it may seem redundant to comment upon on the virulently racist rhetoric, flagrantly Islamophobic policy initiatives, and brazenly xenophobic stances of President Trump. Nonetheless, we at CAIR will continue to oppose President Trump’s ascension and the hate he has fomented in this nation.

It is my privilege at this moment of American history to work for CAIR, and to resist the hate and intolerance of this presidential administration, continuing fighting for the civil rights and liberties of American Muslims, and for an America living up to its self-proclaimed ideals of liberty for all.