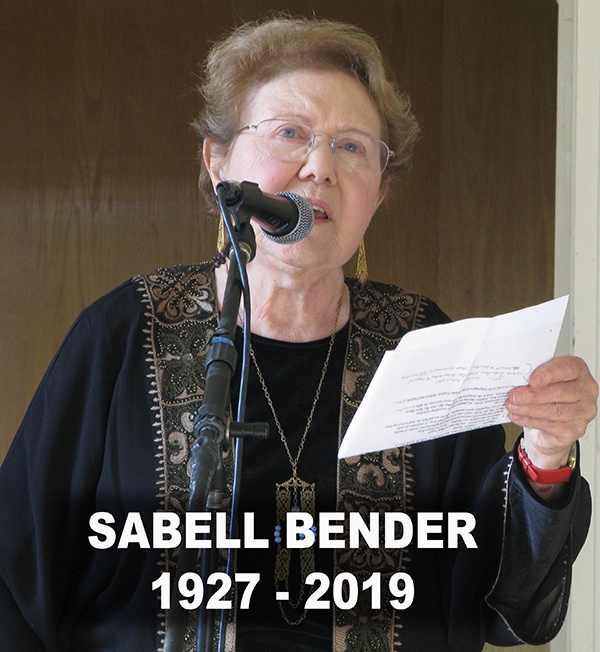 My mother, Sabell Bender, died two days ago at the age of 92 after many years of painfully declining health. Even in her final years, when her assembly of medical conditions had left her immobile and robbed her of her booming and unforgettable voice, she clung to life with all the dedication and exuberance and yes, stubbornness, with which she had lived her nine decades on the Earth. Sabell was a born director and a force of nature, who, while acknowledging that she was a product of her times, also believed with all her heart that her abundance of talent and creativity made it possible for her to influence the times in which she lived.

Her earliest memories were of Brooklyn during the Great Depression, where her father and mother, together with hundreds of thousands of other Jewish immigrants from Eastern Europe, became consumed with the great labor struggles of the 1930s and dedicated their lives to progressive politics. They were Bernie Sanders socialists when Bernie was still in diapers.

But it was not only politics that animated Sabell’s early years, but a love of Jewish culture and the Yiddish language in which it blossomed; that were the twined pillars that guided the rest of her life.

Sabell’s own blossoming of her preternatural talent occurred when her family moved to sunny Southern California in 1938, and Sabell became the wunderkind of the Yiddish-speaking progressive Jewish community. She was the Greta Thunberg of her time, blessed with a maturity beyond her years, and constantly called upon to perform poetry at any number of community events and political rallies.

When World War II ended in 1945, and the true extent of the Nazi genocide became known, our community’s struggle to keep alive the Yiddish culture of the Six Million victims was undertaken with almost messianic zeal. But Sabell heard the siren call of the stage as well, and in 1947, she was accepted into the School of Dramatic Art in Hollywood under the tutelage of legendary Russian acting teacher Maria Ouspenskaya, herself a student of Konstantin Stanislavski in Moscow, the developer of the acting technique known as “The Method” (whose adherents include Marlon Brando, Paul Newman, Al Pacino, Gene Hackman, Marilyn Monroe, and many other Hollywood luminaries).

Among the first theatre companies in New York City to adopt the Method was a Yiddish-language theatre troupe known as the “Artef Players” (who performed on Broadway and was praised repeatedly in The New York Times), among whose members was a young actor named Herschel (Harry) Bender. Years later, in post-war Los Angeles, the teenage Sabell was swept off her feet by the unemployed Yiddish actor 20 years her senior, and Harry and Sabell were married in 1948. Any dreams Sabell might have harbored of Hollywood stardom gave way to the harsh realities of the McCarthyite “witch-hunts” and “blacklists” of the late 1940s. By 1950, with their first child on the way, Harry took to driving a taxi to support the family, and Sabell became a teacher in the network of left-wing, Yiddish-language, non-Zionist, secular Jewish afternoon-schools known as the “Kindershules.”

By mid-decade, with our family now numbering four with the arrival of Ed in 1955, Sabell became principle of all the Kindershules in Los Angeles, and one of the leaders of our whole community at a time when, even on the Left, women rarely had leadership roles.

And then, once every two years, Harry and Sabell, and their fellow actor friends, would take to the stage to perform in a new Yiddish-language production of the “Los Angeles Folksbienne.” Our home was Ground Zero to all this creativity and activism, and on rehearsal nights, my brother and I were allowed to stay up late in our pajamas, listening to the actors intoning their lines from the door of our bedroom.

As the Sixties dawned, we were a family and a community perfectly situated to welcome in the Age of Aquarius, and the countless anti-war marches we participated in were our great family outings. In a way, however, the counter-culture of the 60s also pointed to a new direction for Sabell, as she made the decision to cast her net beyond the narrow parochial confines of the Yiddish-speaking secular community. This decision was also born out of economic necessity born out of tragedy, as Harry was diagnosed with lung cancer and died in 1969.

Finding new inner strength from this loss, Sabell went back to college, earning a Master of Fine Arts in Theatre from California State University, and shortly thereafter, was hired as the Drama Director of Oakwood Secondary School in Studio City; it was a match made in heaven. For the next 20+ years, Sabell turned out one great production after another. Her productions of “Cabaret” and “Fiddler on the Roof” rivaled those of professional troupes, and many of her students went on to great professional success: Elizabeth McGovern (a.k.a. Lady Cora of Downton Abbey), actress Jennifer Jason Leigh, film director Todd Haynes, and singer/actress Moon Unit Zappa.

Sabell married again to Morrie Molotnick, an old family friend, and they shared eight wonderful years together, until, alas, cancer struck again, and Sabell was made a widow for the second time in her life. Many often marveled at her ability to turn tragedy into inspiration, but at times, Sabell’s intensity, her single-minded determination to overcome all odds, her total lack of self-doubt, her self-admiration, was hard to take, especially for those close to her. She was a true diva with all that entailed.

Retiring from Oakwood in 1995, Sabell embarked on her final professional journey, touring the country with her trademark lectures and performances from the history of the Yiddish Theatre. Many of these can be found on YouTube by searching “sabell bender yiddish”.

Although brought much nakhess (joy) by family, especially by the accomplishments of her two wonderful daughters Kelly Bender and Katharina, and finally the arrival of Dalia, her most remarkable granddaughter, in 2001, her final two decades were marked by a steady unrelenting and horrific decent into a physical abyss, as one organ after another of her body failed, and as accumulated and collected ailments as others collected baseball cards. She was finally left immobile and almost totally unable to speak, although tragically with a mind as sharp as ever, as I recall a visit to her some two years ago, and watching the new president on TV together, Sabell motioned me close to her, and barely whispering into my ear, said the words: “fucking asshole.”

Sabell did not understand my lifelong fascination with religion, my love of Islam, my feelings of kinship to the Muslim community; no matter. Sabell intrinsically knew who her enemies were, and who her allies were in these tumultuous times in which we find ourselves. She touched and influenced many during her long life, and her left a remarkable legacy of courage and creativity that will long be remembered.

May her memory be a blessing.