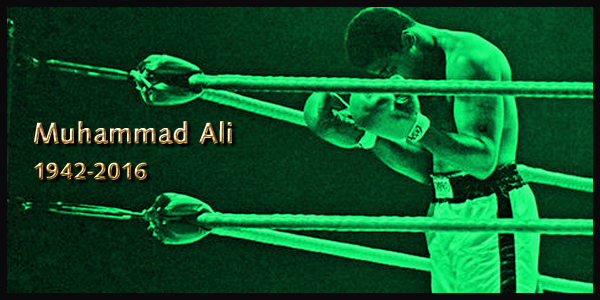 I saw him in person once. It was during his exile from the ring, after his championship title had been stripped from him by the white establishment that controlled the sport. But to the African American community, he was still “The Greatest,” and in summer of 1967, Muhammad Ali was the Grand Marshal of the annual parade through the Watts section of Los Angeles. My parents, fervent supporters of the civil rights movement, decided to take my brother and I to the parade as an act of solidarity with the people of Watts – whom only two years before had revolted in a spontaneous rebellion against American apartheid. As we drove through Watts, we could still see dozens of burned-out stores.

The crowd was already several people deep on the sidewalk when we arrived, and I could barely see over the heads in front of me. A nearby telephone pole provided a solution, and before my parents could object, I had scurried halfway up the pole with the help of its convenient rungs. A high school marching band passed by, and then an open convertible with the Champ sitting on the trunk, his feet on the back seat. Even now, decades later, I remember how huge he appeared to me, an adoring young fan. Waving furiously, I yelled “Muhammad! Muhammad Ali!” and the Greatest looked up, smiled at me, and waved back; a moment frozen in time, revived from the archival past as I now devour every online obituary I can find.

I first heard about the faith of Islam because of Muhammad Ali and Malcolm X. Inspired by their “reversion” to Islam, I began my own exploration of “God’s Final Revelation,” and the remarkable Islamic civilizations that grew in Spain, North and Sub-Saharan Africa, Turkey, the Middle East, the Indian Sub-Continent, and South East Asia. And contrary to popular perceptions, I learned that, far from being inherently anti-Semitic, Jews were an intrinsic part of the Muslim World for over a millennium, and inspired by Arabic language, grammar, and poetry, and Islamic philosophy, science, and mysticism.

We should not forget as well the spiritual journey of Ali and Malcolm, travelling as they did from sectarian racial chauvinism to a universal understanding of Islam as a faith open to the multi-colored rainbow of the entire human family. I doubt very much I would be working for CAIR today without the inspiration I found in the life journeys of Ali and Malcolm.

Yet, as I make my way today through dozens of online and print obituaries, I am repeatedly struck by their ahistorical tone of reverence. While it was easy to worship Ali in his last years of decline, many forget that during his prime, he was probably the most hated man in America, reviled by both whites and Blacks for renouncing Christianity and accepting the strange and “foreign” faith of Islam, and refusing to fight in an unjust war.

It was also Ali’s courage, however – both inside and outside the ring – that inspired many in my generation to organize against the American War in Vietnam. Although Ali’s refusal to step forward during his military induction and join the army meant the potential loss of millions of dollars and the prospect of prison, he became a hero of conscience to millions around the world struggling in their own lands for a better future, and an end to military and economic oppression.

Like Mozart, Ali’s unbridled genius comes but once a century, a convergence (or God’s gift) of beauty, agility, strength, intelligence, and courage. We mere mortals should forever be grateful that Ali graced the times in which we lived, as he blazed across the latter-half of the Twentieth Century like a comet, only to be slowly extinguished by the ravages of disease and time. But like Beethoven, himself impaired by the loss of his hearing, while Ali’s Parkinson’s first slowed, and then finally robbed him of his speech, and turned his balletic movements into a slow shuffle, his disability could not defeat his bravery, as he climbed the steps in Atlanta, the Olympic torch held high in his trembling hands.

Sometimes late at night, when I feel exhausted by the Islamophobic forces of hate aligned against the Muslim community, and the terrifying prospect of a demagogic triumph in November, I go to YouTube and watch Round 8 of the “Rumble in the Jungle.” There he is again, coming off the ropes, pivoting into position to land the solid right against George Foreman, reclaiming the championship title that had been stolen from him years before. He made all things seem possible.

As my many Muslim friends in Philadelphia and around the US now approach the sacred month of Ramadan, with its obligation of spiritual introspection, and the rest of us go about our busy lives, balancing work, family, and the organizing demands of the most crucial presidential election in our lifetimes, I hope we can all pause for a few moments and remember the life and journey of Muhammad Ali, a most remarkable man.

May his memory be a blessing.