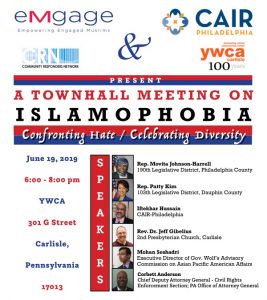 (PHILADELPHIA, PA, 6/17/19) – The Philadelphia chapter of the Council on American-Islamic Relations (CAIR-Philadelphia), the nation’s largest Muslim civil rights and advocacy organization, and its interfaith partners, will hold a Town Hall meeting on Islamophobia near the US Army War College in Carlisle to draw attention to the College’s invitation — then “postponement” — of a public lecture on the so-called “Clash of Civilizations” theory between the West and the Islamic world by a well-known anti-Muslim activist.

The Town Hall Meeting will include local politicians and religious leaders and provide an opportunity for the audience to talk about the controversy surrounding the events at the US Army War College, as well as the experience of Islamophobia in their own lives.

The event is free and open to the public.

For background on the US Army War College controversy, see the following links:

In response to the coalition’s campaign against his lecture, Ibrahim restated his bigoted claim that “Islamic terrorism and ‘extremism’ are intrinsic to Islam, and have been from its first contact with Western civilization in the seventh century.”