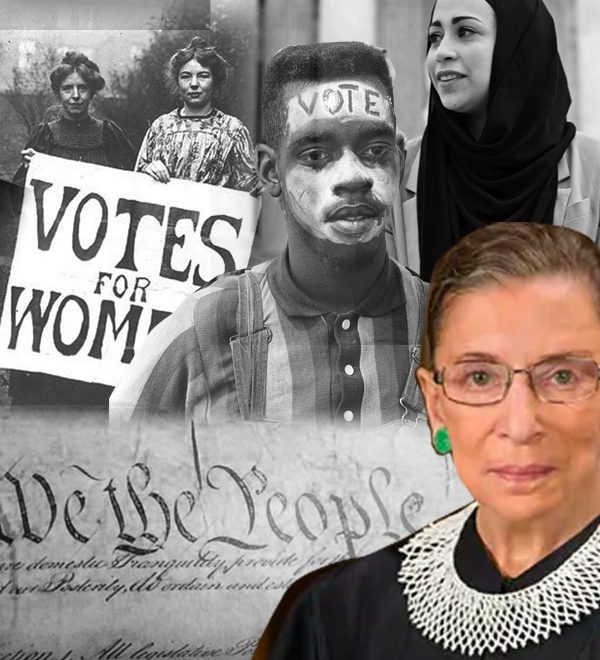 At the age of 87, her body finally gave up the struggle, burdened as it was with so many ailments that have forced far younger people into retirement.

And so, after holding on for so long, Ruth Bader Ginsburg died. Long live RGB! Conscience of the nation! Mother of gender equality!

The Muslim community mourns as well. During this inferno administration, burning with racism and the flames of violence, in case after case Justice Ginsburg defended the civil liberties of American Muslims. In EEOC v. Abercrombie v Fitch, it was the right to wear the hijab. In the so-called “Muslim Travel Bans,” she wrote a scathing dissent to the 5-4 ruling, specifically calling attention to then candidate Trump’s anti-Muslim rhetoric during the 2016 presidential campaign.

And as a defender of the rights of women, Justice Ginsburg was without peer. She was the first tenured female professor at Columbia Law School, and in 1972, Ms. Ginsburg was hired as the first director of the A.C.L.U.’s Women’s Rights Project. And in 1996, in United States v. Virginia, she wrote the opinion which struck down the Virginia Military Institute’s (VMI) male-only admissions policy as violating the Equal Protection Clause of the Fourteenth Amendment.

We can most honor the legacy of Justice Ginsburg by continuing her lifelong struggle to make America a land of justice, not of privilege, and a land where women are truly equal, in the home, in the mosque, synagogue, and church, and in the workplace.

I would be remiss not to mention that Justice Ginsburg died on the first day Rosh Ha-Shannah, the Jewish New Year that begins the 10-day period known as the “High Holy Days,” and that includes the fast-day of “Yom Kippur.” This is a time of personal and communal introspection, on the one hand, and working for justice and peace, on the other. This was the tradition Ruth Bader Ginsburg was raised in, and this Biblical quote from the Book of Isaiah about the meaning of fasting on Yom Kippur, read aloud in the synagogue as part of the High Holy Days liturgy, surely played a part in Justice Ginsburg’s life-long struggle to bring justice to the poor and the oppressed:

No, this is the fast I desire: To unlock fetters of wickedness,
And untie the cords of the yoke
To let the oppressed go free;
To break off every yoke.
And share your bread with the hungry,
And to take the wretched poor into your home;
When you see the naked, to clothe him, as you would your own kin.
And if you offer your compassion to the hungry,
And satisfy the famished creature
Then shall your light shine in darkness,
And your gloom shall be like noonday.

The passing of Justice Ginsburg for promises even more difficult days for our nation, as the Trump Administration seeks to leave its mark on the American justice system, and to finally strip away all the last vestiges of progressive legislation from the 1960s and 70s.

What began with only trepidation at the 2016 Inauguration has now metastasized into a nightmare that has eclipsed even our most wild imaginations: a rush towards tyranny, a burning planet, a pandemic of medieval proportions.

Changing course is no longer an option, but an urgent necessity, a necessity RBG spent her last days and hours and minutes fighting for. Let the memory of her life be the light that illuminates our way forward.

Finally, CAIR-Pennsylvania believes that, in the middle of a pandemic and an election already underway, it is only the next president of the United States who should appoint Judge Ginsburg’s successor. Please make sure this message is relayed to your senators and representatives in Washington DC.