About his new book: The Hundred Years’ War on Palestine 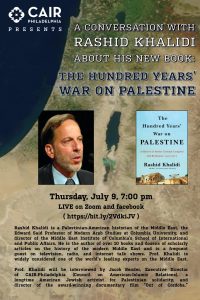 Rashid Khalidi is a Palestinian-American historian of the Middle East, the Edward Said Professor of Modern Arab Studies at Columbia University, and director of the Middle East Institute of Columbia’s School of International and Public Affairs. He is the author of over 10 books and dozens of scholarly articles on the history of the modern Middle East and is a frequent guest on television, radio, and internet talk shows. Prof. Khalidi is widely considered one of the world’s leading experts on the Middle East.

Prof. Khalidi will be interviewed by Jacob Bender, Executive Director of CAIR-Philadelphia, a longtime American Jewish activist for Palestinian solidarity, and director of the award-winning documentary film “Out of Cordoba.”