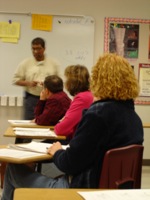 This 10-part course approaches Islam from a historical and scriptural perspective, covering the foundations of the religion and then building on the economic, political and cultural institutions that arose in Muslim societies. It covers the Golden Age of Muslim civilization and then discusses its decline. In addition to an examination of source texts, contemporary issues faced by Muslims and Muslim societies will be covered. This course has been taught at over two dozen venues in the greater Delaware Valley area and is offered regularly.