In 2008 CAIR-Pennsylvania expanded the depth and breadth of courses offerings on Islam and Muslims to religious and cultural organization throughout the Greater Philadelphia area.

CAIR-Pennsylvania taught its highly successful course Understanding Islam and Muslims Through History and Jurisprudence, in its full 10-part format twice last year and once in an abbreviated 5-part format. This course approaches Islam from a historical and jurisprudence perspective and covers the Golden Age of Muslim civilization and its decline; contemporary issues faced by Islam and Muslims; and the ramifications of U.S. involvement in the Muslim world.

During the course of the year CAIR-Pennsylvania also rolled out several new courses. Among them was an 8-part course entitled Understanding Political Islam, which covers the development of political institutions and expressions in Muslim history; U.S. involvement in the Muslim world and its ramifications on the modern political institutions. Other courses offered by CAIR-Pennsylvania included Understanding Islam in a Modern World: A Comparative Perspective, Introduction to Islam, Jesus in the Islamic Tradition and The Path to Forgiveness.

Throughout 2008 CAIR-Pennsylvania participated in numerous interfaith panel discussions to promote understanding between people of different religion traditions in order to uphold peace and prosperity in our communities.

In 2008 CAIR-Pennsylvania received 78 new civil rights complaints ranging from immigration delays to employment discrimination to public accommodation, which represents a 28% increase over the 57 we recorded in 2007. When combined with open cases that rolled over from the previous year, CAIR-Pennsylvania handled a total of 109 complaints in 2008. Of those we were able to close 49, leaving the remaining 60 pending resolution.

CAIR-Pennsylvania began the year advocating for a Philadelphia woman who was forced quit her job for refusing to remove her hijab. After our attempt at direct resolution with the woman’s former employer were rebuffed, CAIR-Pennsylvania pursued action through U.S. Equal Employment Opportunity Commission (EEOC). Our advocacy at an EEOC convened mediation session resulted in a significant monetary payment by her former employ and a change in company dress code policy to help prevent this situation from occurring again.

CAIR-Pennsylvania continued the year by advocating on behalf of another Philadelphia woman who was denied the ability to leave work to attend Friday prayers. Once notified of the situation, CAIR-Pennsylvania sent the woman’s employer an advocacy letter explaining the importance of our weekly congregational service and the requirements to provide reasonable accommodations for religious practices. As a result of that letter, the employer decided to allow the woman to attend Jumah.

Later on, a West Chester teen reported being the target of religious and national origin harassment at her place of employment. CAIR-Pennsylvania once again provided assistance to a Muslim in need and sent the young woman’s employer an advocacy letter alerting them to the situation and requesting specific remedies. After several months, those employees responsible for the harassing treatment were first suspended then terminated.

CAIR-Pennsylvania’s reach even extended to Delaware last year when a woman from that state contacted us because she had been denied access to a local company’s public restroom. After listening to the woman’s situation CAIR-Pennsylvania sent the company and advocacy letter on her behalf and assisted her in navigating Delaware’s Human Relations Commission complaint process. CAIR-Pennsylvania’s involvement in the situation helped bring about a satisfactory resolution.

Last year CAIR-Pennsylvania highlighted a case involving a Philadelphia Police Officer struggling to win a religious accommodation to wear a headscarf while in uniform. This year we would like to report that in September 2008 the attorneys CAIR-Pennsylvania originally secured for her a year earlier, argued her appeal in front of the 3rd Circuit Court of Appeals. As of the printing of this booklet we are all awaiting the courts ruling.

In addition to all the civil rights complaints handled in 2008, CAIR-Pennsylvania also held our first Immigration Information Session in partnership with the United States Citizenship and Immigration Services with the aim of providing our community with a forum for addressing immigration concerns. Approximately 30 members of the community came forward with questions and comments regarding specific immigration issues. 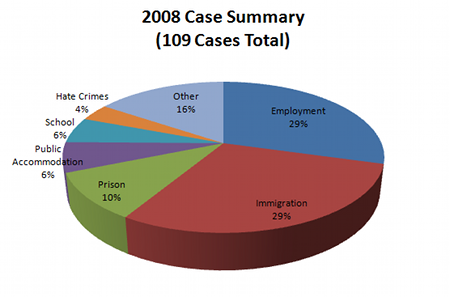 In February of last year, The Foundation for Islamic Education and CAIR-Pennsylvania began jointly offering a 1-year academic program on Islamic Juristic Sciences designed to provide a comprehensive understanding of the Principles of the Sciences of Islamic Law.

The course also placed an emphasis on the historical development of Islamic Law with an examination of its application to current global, intercultural, and social challenges. In April, with interest in the U.S. Presidential election surging CAIR-Pennsylvania organized a series of Civic Participation Workshops lead by our National Legislative Director, to educate the community on how the political system works and how we can take ownership of important issues and bring change for our communities.

In September, CAIR-Pennsylvania launched a structured internship program for local undergraduate students at our center city office. This program gives our youth the opportunity to work with chapter staff on substantive projects that lay the foundation for a more active and vibrant Muslim community while developing professional skills and gaining insight into the societal impact of public service.